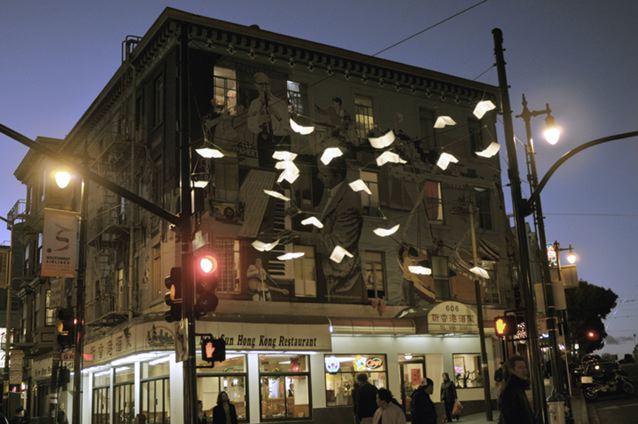 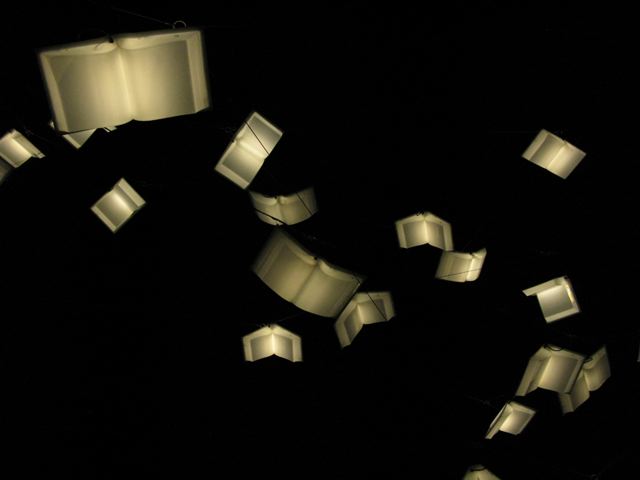 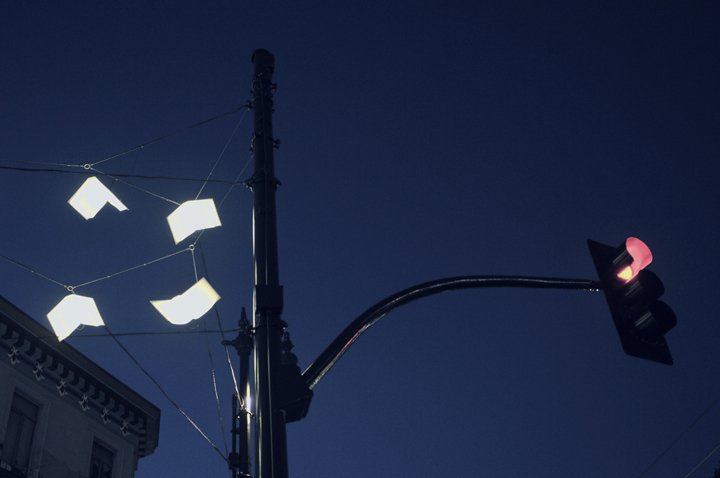 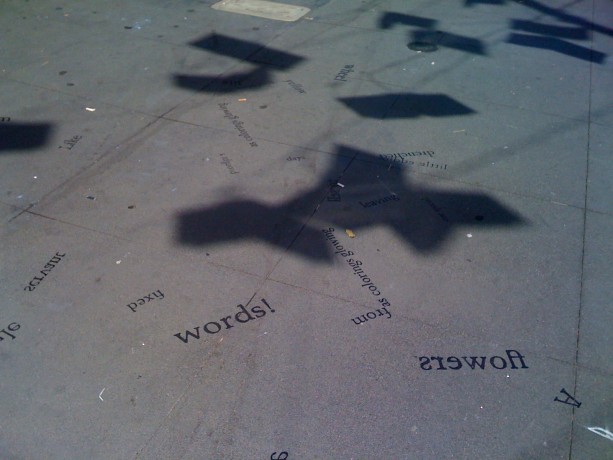 Language of the Birds

(A site-specific sculptural installation for the public plaza on the corner of Broadway, Grant and Columbus Streets, San Francisco)

Historically “The Language of the Birds” was considered a divine language birds used to communicate with the initiated. Here, a flock of books takes off from the plaza to fly the urban gullies of the city. The fluttering books have left a gentle imprint of words beneath them. These serendipitously configured bits of local literature reveal the layering of culture, nature and consciousness.

Language of the Birds is a flock of twenty-three sculpted illuminated books, which appear to have just taken flight from the plaza like pigeons scared up by a passer by. Appearing to be in motion, the books have flown open creating various wing positions with the pages and bindings. The entire artwork appears to be in motion with each book holding its position as a bird does in a flock.

Each unique book is fabricated in frosted white translucent polycarbonate. These sculptural elements are suspended from a geometric web of stainless steel aircraft cables. At night LED lights embedded in the books create visual patterns, at different times one might see the flock subtly pulsing or displaying a spectacular zoetropic effect. The dynamic lights of Language of the Birds play in the night sky with the other luminous signs of the area.

Passing under the flock, pedestrians notice words and phrases embedded in the plaza floor that appear to have fallen from the pages. On closer inspection the fallen words are in English, Italian and Chinese and were selected from the neighborhood’s rich literary history, ranging from the Beats, to SF Renaissance poets and Chinese writers, over 90 authors are represented including Armistead Maupin, Gary Snyder,William T. Vollman, and Jade Snow Wong.

The artists created the design of the plaza floor in Atrium of the SFMOMA. Retaining their original font, individual words from chosen phrases were cast from the third floor gallery of the museum. Words fluttered down 60 feet landing on a paper replica of the plaza thus determining their resting place in the final artwork. Influenced by practices like reading tea-leaves and Japanese gardening techniques. The words intersect in ways that allow for new unique interpretations and meanings.

Goggin conceptualized of the piece during a residency at the Djerassi foundation. “I sat with my understanding of the site, while watching swallows move through the air, they came together to create fleeting compositions. The image of flying books emerged from the idea of culture and nature interconnecting in unexpected ways.” Influenced by the literary genre magic realism, his sculptures bring new life, movement and meaning to familiar objects .

Historically “the language of the birds” is referred to in mythology, medieval literature, and occult texts as a mystical, ideal or divine language, or a mythical or magical language used by birds to communicate with the initiated. In Kaballah, Renaissance magic, and alchemy, the language of the birds was considered a secret key to perfect knowledge.

Goggin and Keehn teamed up with scientist David Shearer and Lawrence Ferlengetti’s City lights bookstore to power Language of the Birds with solar panels mounted on top of the iconic bookstore. It is the first permanent solar-powered public art piece in the United States.